This is among the articles filed under “Travel Stories.” Click here to see them all and check back as we continue to add stories.

RV travel serves well to introduce one to all kinds of people, but there are some things that can be found just about anywhere.

Leah described them as sharks.

On the first day of February, we made a short pull to Los Fresnos, Texas. After checking in at the office and waiting for some site preparation required by the recently departed trailer, I drove the truck and trailer to the site and started backing in.

The angle wasn’t horrible but wasn’t great. I was backing it in on my right side instead of the easier left side. More than anything, it was the first time I backed our new trailer – now a bumper pull instead of a fifth-wheel (more on that in a later post).

In our booklet, “Is RV life for me?” I related the story of a fellow who came up and insisted I let him finish backing in our first trailer the first time I tried. He said it was too painful to watch.

In our most recent episode, the neighbors from either side came out to gesture and advise. The guy across the street simply offered to move his pickup if that would help. Then the most knowledgeable of them all came up to my window and gave me point-by-point instructions until I had it in straight enough that I could finish it off. Leah said there was another man and two women who also circled for a while, but they never got in my way.

Once the trailer was parked, set up and utilities connected, Leah and I had a laugh over the circling of the sharks.

At least during daylight, it’s extremely difficult to arrive at or leave from an RV park without doing so under watchful eyes. It’s also not at all uncommon for someone to at least make their presence known should you have questions or need help. Some, of course, will just outright volunteer their opinions.

But in a park like this, where almost all the residents are retired, where you have roaming packs of old men with a dearth of people to order around, where the most exciting thing of any day might be watching someone back a trailer … well, you might as well expect to encounter sharks. 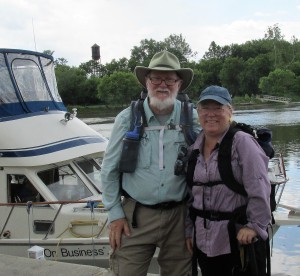